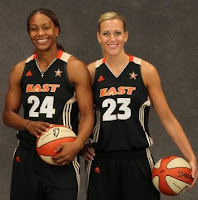 There was Katie Douglas courtside, epicenter of the final couple seconds of Championship-clinching Game 4. She hadn't scored in weeks, but she deserved this moment just as much as Tamika Catchings, who won Finals MVP. When the injured star was out, the rest of the team stepped up and overcame tough obstacles to bring home the championship. This marks the 2nd professional championship won in Indianapolis this year (Superbowl) and first pro basketball title since the ABA championships in the early 70s.

Coach Tom Crean reminds us MSU, UM and O$U are the current champs, and while it's nice to be in the (natl) title conversation the real challenge is improving everyday... Trickle-down leadership, starting with Watford. One reporter asked him to comment on the state of basketball in the Midwest, with Louisville, UK, and Michigan all contending. He then reminded her of O$U, Illinois and the rest of the B1G as well as Cincy, Butler and Notre Dame.

Speaking of ND, for the 4th straight year, Football Irish are #1 in grad rate, and likely top-5 in GPA too (Academic All-Americans Mike Golic and Manti Te'o). ESPN Gameday will be in Norman this Saturday as your Irish take on the Sooners in a  primetime matchup featuring a pair of top10 teams. If only Keith Jackson was calling it... WHOA NELLY!