There are three distinct moments that stand out to me more than any; more than the Marco Killingsworth dunk over Duke in '06, more than the Knight chair toss in '85, or the hundreds of visits I made as a student, some of which included spying on a closed practice. I could write a book telling you about the details of each of those events. Trying to find the words to summarize them is difficult enough, but succinctly accentuating WHY the moment is so special to me is the true challenge. I'll try to put you in my shoes.

#1. My freshman year (2000) started off with a bang - Bobby was fired my first week of college. As a student reporter, I covered the story feverishly until the hype eventually died down weeks later, when the next big story came along - a Presidential election which turned into a runoff and recount, and again, as a reporter I pushed myself to the limit, exhaustively covering every detail possible. Little did I know that both of those experiences would be dwarfed by opening weekend of my 2nd semester.

My dormmates all had season tickets together, and some games were on the floor behind the hoops, and other seats were in the balcony, with a good mix in between. IU is notorious for having the most student seats and it was a real treat when you had floor seats, and a real downer when you're in the nosebleeds. The Michigan State game was one of those. Garcia & I decided that if the game is close at the final timeout (4-min) we'd run down to lower level and just stand on the sidelines. It was already chaotic, nationally televised (MSU was #1) so there was a healthy police presence by the benches. But they were fans too, and what they didn't notice is how I made my way to where the cheerleaders stand and just kinda blended in. Afterall, this was the final play of the game and I wanted a good view.

Rewind 3 years earlier when I was a spectator rushing the court at Columbus North HS after my LC Bears beat the Bloomington North Cougars (led by Jared Jeffries and Duany Duany) on a buzzer beater to advance to Semi-State on March 13th 1998.

So I was no rookie to court-rushing, which I think gave me the confidence to do what I did next, which is LEAP OVER a cheerleader to get on the court. No less than one second after the buzzer went off and that ball swished, I was the first fan on the court sprinting towards Kirk Haston. As the players stacked onto each other one-by-one, I had to decide whether to join the dogpile or do the smart thing and protect the players. So I slid to my knees and scooted into the pile, caught my balance and put my hands up in celebration. ESPN Sportscenter replayed this moment over and over and it was later voted the #1 play, forever memorialized on VHS and then YouTube. Yep, that's me. 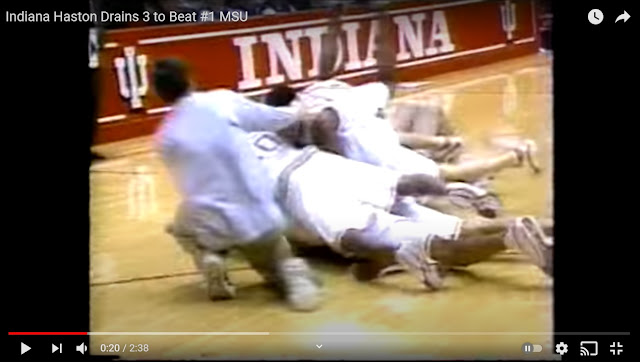 #2. The date is December 10th, 2011. The weeks before, I remember extending my vacation in Guatemala beyond Thanksgiving and into December. But there was a nagging feeling that I need to go back home for this game. After all, Kentucky was ranked #1 in the nation and IU was undefeated. The rivalry was as strong as ever, and ESPN Gameday was in town - along with tons of alumni... it was an electric atmosphere.

My 2nd favorite memory from this day was how I obtained my ticket to the game. I'd been StubHubbing and Craigslisting all week hoping to get a ticket for under $125 but the only double-digit prices were Student tickets. As an expert scalper, I was counting on being able to get a good deal near tipoff. No luck; prices were even higher and harder to get. Now here's a lil tip I learned elsewhere and will forever thank my luck, because I walked up to the teller box, jokingly asked if there were any tickets available, and to my surprise she responded "let me check!" and lo and behold, she says "I have one. Thirty-six dollars." I couldn't believe it. What are the odds that someone actually returned their unused ticket just before I asked for one? Moments later, there I was: center-court, main level, 30 rows up. Fast-forward to the final play of the game, and I felt like I just had to get this on video, just in case. You know the rest.

#3. The date is October 16th, 2010: I'm in Btown cuz it's Homecoming weekend and duh, Midnight Madness - which is now called Hoosier Hysteria and played at reasonable hour instead of, well... ya know. This edition featured former-player autographs (Damon Bailey, etc) and then the show got started with the player announcements, lights, videos, and all that pomp. This year's squad was 'led' by senior J.Rivers, son of Doc. I use softquotes because really the stars were the sophomores: Mr. Basketball Jordan Hulls at point, Christian Watford up front, and wingman Mo Creek. Juniors VJ3 and Tom Pritchard were both 3-yr starters, so this was a pretty good squad. In fact, a couple of 3-star incoming frosh didn't really register on my radar until this night: Will Sheehey and Victor Oladipo. There was a scrimmage, and a 3-point contest, but the event that stood out the most was the slam dunk contest. A handful of guys displayed their athleticism, but Victor immediately jumped into my full attention. He was doing NBA Slam Dunk contest-type dunks, including one where he gathered a group of children and had them stand under the hoop. Of course, he completely lept over them and it was a great PR for the program to incorporate fans as props, like a magician. This kid was beaming with talent. I remember thinking, "this kid is the next Michael Jordan; I have to go meet him."
So naturally I walk across the court after the show is over, and ask for a picture. 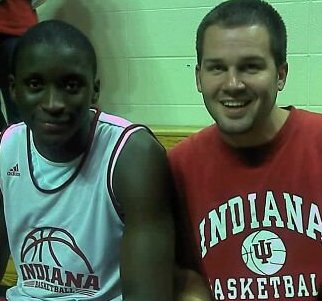 He wound up starting a few games that year, before taking a giant stride his Sophomore year (see #2 above), and then an even BIGGER leap his Junior year. As we all know, Vic eventually reached the NCAA Player of the Year runner-up distinction, missing the top spot by a couple voting points. Then of course he was the 2nd overall draft pick, to the Magic, where his first game was right here in Indy with ya boy sitting courtside welcoming him home. I still feel pretty good about my MJ comparison and anybody who's heard me say that usually rolls their eyes. Then came the trade to Indiana, and the All-Stars, and his singing career, the All-NBAs... who knows what's next. I tried to tell em. They don't roll their eyes as often these days.