My team is better than yours 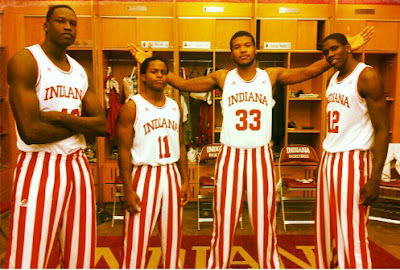 The worst kept secret was released today: Indiana Hoosiers basketball is the top team in the land. Not only are they returning all 5 starters from last year, but Sheehey is the best 6th man in the nation and Yogi adds backcourt depth. Its an embarrassment of riches that wasn't exactly easy; Coach Tom Crean has pieced together a title contender in just 4 years after inheriting a program with 1 (former) walk-on.

IHSAA football sectionals begin this week, and look who is ranked #1... da Bears. Lawrence Central went to the title game in 2010 but lost to Fishers at Lucas Oil stadium while Mr Football Tre Roberson eventually took his talents to Bloomington.  QB Drake Christen leads the state's most prolific offense (42 ppg) while A-Rod and Isaiah Townsend own the run game and a solid D known for shutting-out opponents all season. Eyes will be on the sectional semifinal next week, where LC looks to avenge last year's loss to 2011 State Champ, Carmel Greyhounds.

Speaking of stout defense, Notre Dame has yet to allow a rushing TD this year as they sit undefeated in the BCS hunt. Their 6-0 record and top-5 ranking is boosted by downing three ranked opponents and could get better with wins @ Oklahoma & USC. Linebacker Manti Te'o is a Heisman contender and the other #5 leads the dynamic offense, even though veteran QB Tommy Rees has had to pick up Everett Gholston's slack a few times.

Pacers begin the season later this month with some unfamiliar faces, adding role players DJ Augustine, Ian Mahinmi, Gerald Green, Sam Young, as well as draft picks Orlando Johnson and Miles Plumlee. Some say the bench didn't really improve from last season, but the chemistry of the starting 6 (Hansbrough) strengthened, plus major improvement from George Hill and Paul George should compliment the frontcourt of Danny Granger, David West and Roy Hibbert, who signed a max-contract this offseason.

I am holding off on talking about the Reds until I've cooled off from their choke-job, but my headline still holds true unless you're a fan of SF, NY, STL or DET.

And finally the Colts. Yes, I'm still soaking in the victory over the Packers. All I can say is Andrew Luck is my hero. Other than that, ChuckStrong!