April 14, 2007
When you hear your dad say, "Why wait when there's a chance of getting hurt?" know that it's his paternal duty to support you. He also thinks you're getting your degree in your off-season (haha). But then I read your ex-coach's comments:

"He's averaging like nine shots a game, and he's shooting 60 percent or better. It's frustrating for him," Jimmy Smith, Oden's first coach and one of his closest friends, said prior to the Final Four.
"They want him to play all this defense, then they want to go down and shoot the 3," Smith said. "By talking to him, I know it's frustrating to him that he doesn't get the ball as much as he should."

So you're frustrated about not getting more shots per game? What makes you think you'll get more shots in Memphis? or Boston? For as mature as you look, you surely aren't showing any wisdom. Nobody believes what your dad said, except maybe you.

W.T.F is going to make your draft status drop??? 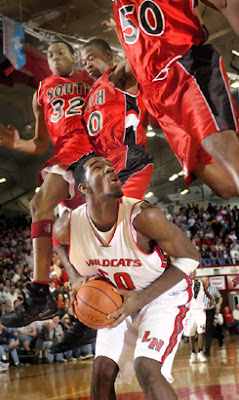 You & your best friend create the best 1-2 combo in the nation. Where is your competitive desire to win? You lost (maybe) ten games in 5 years and you're tossing aside W's for ½ the salary you'd be making if you waited til after you graduate. Thad's elite classes will continually provide title aspirations... while Paul Pierce and Damon Stoudamire will keep your wins at a minimum. I didn't know if you noticed, but being on national TV a couple dozen times per year aint bad. But hey, at least now you're rich!