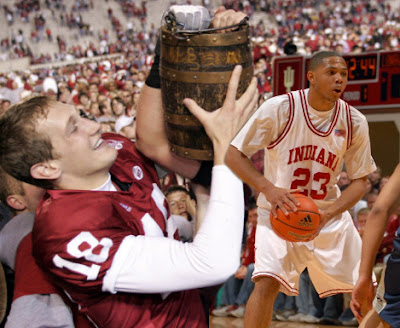 A.Starr and EJ respectively earn Players of the Week, celebrating THE greatest weekend in Bloomington of 2007. The football team will be playing their first Bowl game since '93, the basketball team is undefeated and atop the BigTen, and the Men's Soccer squad is ranked #4 overall headed into the Sweet16.
Non-Btown News: The Indiana Pacers, Notre Dame Irish AND Superbowl Champion Indianapolis Colts all halted their 2-week (too weak?) losing streaks. The problem is the Irish are on a good note, at 2-and-whatever. With Freeney done for the year and more nagging injuries for Jim O'Brien's frontcourt, it's still amateurs over pros (...amateur's overprose!).