Hoosiers in the 2008 Beijing Olympics

July 07, 2008
Aarik Wilson took first place in the triple jump at the US Track & Field Olympic Trials yesterday, setting the record at Hayward Field (Eugene, Ore) with a jump over 57 feet. A-Dub was a 10-time All-American while at IU. 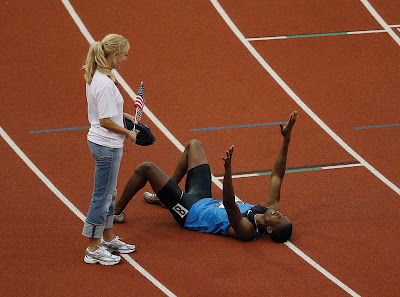 David Neville (pictured above) qualified for the Olympics by placing 3rd in the 400 m with a career best 44.61. The five-time All-American was a BigTen Champion in both the 200 and 400 in 2006. He forfeited his collegiate status when he signed a professional contract with Nike, but later graduated from Indiana University in 2007.

Christina Loukas won a spot on the Olympic team, thus joining six other divers with Indiana ties. The national training center moved to Indy after the Americans failed to win a diving medal (in Athens) for the first time since 1912. Other notable divers include Thomas Finchum (18) of Indy, David Boudia (19) of Noblesville, Mary Beth Dunnichay (15) of Elwood, Kelci Bryant (19), Ariel Rittenhouse (17), and Haley Ishimatsu (15).