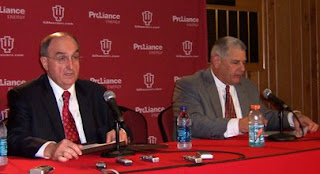 ► Zeke's Suicide attempt = FAIL
► Colts lose their divisional reign on MNF
► Irish Send Ty Willingham to early retirement after blowing out the Huskies
► Basketball Hoosiers are preseason-ranked 11th by everyone, which means zero expectations for a whole year. That being said, I think Pritchard and Dumes could reach All-BigTen level, but question is how soon? I'll be witnessing that sitting courtside flossin my new IU jacket
► Football Hoosiers defeated #22 ranked Northwestern during Homecoming in Bloomington this Saturday, consisting of a glorious tailgate featuring dozens of former housemates, hundreds of familiar faces, thousands of drunk coeds, an appearance by the GIN Bucket, a few hot cups of my new favorite cider: wassail, some pretty good seats and best of all: my new gf, Melissa.
More shenanigans expected this weekend with Spear, Tian, J-Dub, Jilly, Linds, and Somey all coming back to Indy to join MelD, Deter and I @ the Pacers game, the Blues Traveler concert, some drunk bowling, trick-or-treating, video games... maybe even some Denny's - I dunno if we're gonna have enough time!!