Football Stars of the Week 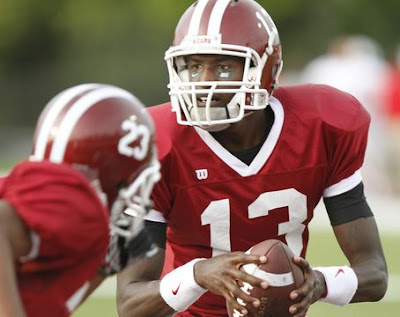 Future IU QB Tre Roberson clinched Indiana Mr Football this weekend when Avon visited for a Regionals matchup @ Lawrence Central. Down 15 points late in the game, he racked up half of his 500 all-purpose yards in a 29-point 4th quarter. LC travels south to Bloomington North this Friday for a chance to play Fishers or Valpo for State next Saturday at da Luc'.
Irish's 11-game winless streak vs ranked opponents was snapped as Tommy Rees led the way in his first career start at Notre Dame. Wisconsin RB Monte Bell's first start contributed to an 83-point outburst against the Hoosier defense. I actually rejoice in this loss, signaling the unofficial end of the Bill Lynch era. The Hoosiers basketball team got off to a hot shooting start in their season-opener vs FL Gulf Coast. The crowd (of 15k) at one point chanted "Yo-gi Fer-rell" as he was in attendance, and today he Tweeted his top 6. They play again Sunday and Tuesday. If all goes well, IU could be 6-0 heading to Boston College December 1st.
Colts beat T.Ocho and the Bengals earlier today; that moves them into sole possession of first place in the AFC South Division - even though Indy's without Joe Addai, Gary Bracket, Bob Sanders, Dallas Clark, Melvin Bullit, Clint Sessions, Anthony Gonzales, Blair White, Mike Hart, Justin Tryon, Brodie Eldrige and Austin Collie... to name a few.