no Colts, no problem 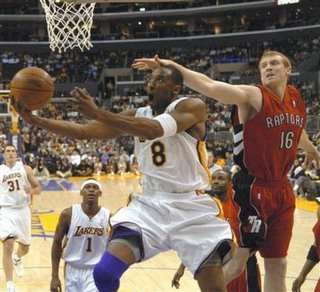 - AFC Championship game: Steelers @ Denver
- NFC Championship game: Steve Smith @ Seattle
- UNC vs FSU - the Seminoles had a shot at the buzzer to upset the Heels. I just wanted to see the crowd rush the court for the 8th time this week...
- KG vs. AI (39 points), a game that ended on Iguodala's off-balanced buzzer-beater, after a 19-point Philly deficit
- the Pistons (chasing the '96 Bulls for best record ever) almost got upset at the buzzer following a 43-point performance from T-Mac
- a 300+ point game in Phoenix that ended w/ a Ray Allen 30-footer at the buzzer
- and oh yea, Kobe dropped 81 on the hapless Raptors, 55 after half

All this following a Duke loss the day before, putting UConn at #1 when they visit Assembly Hall in 2 weeks.