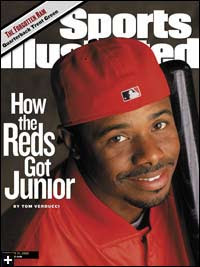 I haven't spoken here much about the Reds, but they deserve a 20-minute blogging. First off, I want to thank them for providing the smidge of interest I still have in baseball... Yankees/BoSox don't do it for me, I'd rather go to a bar and watch it.
► Secondly, Griffey had his best year (30 HR, 100 RBI) since his Reds debut campaign in '00. No player in baseball is more loved than Junior, and I couldn't be happier he's a Redleg.
► Finally: Phillips, Keppinger, Encarnacion and Votto shone bright as infielders plus Hamilton and Bruce in the OutField and I can be renewed again as a fan. Hopper and Dunn will be the weak joints but the Big Red Machine could come alive. Of course, that also depends on who will be in the rotation w/ Arroyo and Harang (Shearn? Belisle? Bailey? Cueto?) to get us into the playoffs. Remember, the Reds play in the shifty NL Central where division winner takes league crown too. As long as they're improving the front office and roster, things are good.

Anyone who watches baseball knows the Reds bullpen needs improvement; will 2008 be the year?