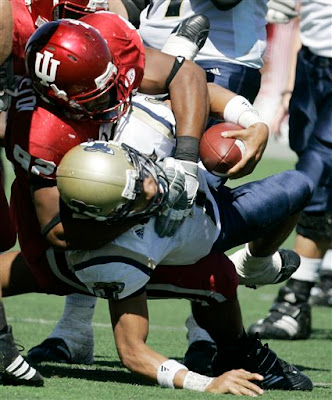 ► IU's defense has emerged as the NCAA leader in sacks thanks to Indy's tandem of Greg Middleton (pictured above) and Will Patterson.
► Kellen Lewis should win BigTen PoW honors after his 5 TD performance, including 200 rushing yards.
► James Hardy is only 5 TDs shy of the school record (30) after only 21 games played.
► Austin Starr (no relation) has missed only one FG in 8 attempts, including a 48-yarder last week vs WMU. This wouldn't be a compelling statistic if you haven't followed IU football for the past decade, but it's a major boost when there's 3 or 4 games each season where IU is on the short end of a single-score deficit. It was so bad that PATs weren't automatic!
► I'm still not a fan of Head Coach Bill Lynch, especially with his horrific play-calling, but Hep's upperclassmen are shining with an undefeated record heading into BigTen play. Without Michigan or Ohio $tate on the schedule this year, the Hoosiers' chances of making a bowl game are as realistic as they've been since the Trent Green era. Speaking of the aging Dolphins QB, I offer you this gem from an IndyStar article regarding Bill Bellicheat:

But Miami Dolphins quarterback Trent Green was among those doubting the sincerity of Belichick's apology, comparing the coach to the megalomaniacal Marine played by Jack Nicholson in the movie "A Few Good Men."

"Belichick is sitting there, and you know he is getting peeved that he is even in there - the audacity to bring him in and question him," Green said, laughing. "The visual I have is that eventually Belichick kind of snapped and said, 'You're darn right I (did).'"