December 21, 2007
Ten years ago we were a franchise with a lone AFC title run in 15 years of embarrassment. Marvin Harrison wore #8 and Tarik Glenn was an undersized 23-yr-old starter. Through drafts alone Polian has built a potent offense via the SEC and da U: Peyton Manning, Edge (now Joe Addai), and Reggie Wayne. After adding Hall of Famers Tony Dungy and Dwight Freeney, the Colts focused on the BigTen: Hawkeyes Dallas Clark & Bob Sanders, UM's Marlin Jackson, and more Buckeyes than just Anthony Gonzales. 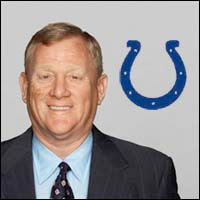 The 2006 WORLD CHAMPS have also achieved:
• 5 consecutive DIVISION BANNERS.
• 5 consecutive seasons of 12+ victories, the first time that has been achieved in the NFL's 88-year history
• the only team in NFL history to win 75% 5 consecutive years (AFC SOUTH is ranked #1)
• A place alongside the Green Bay Packers of '29-31 as the only teams to start 3 consecutive seasons 7-0 or better: 13-0, 9-0 and 7-0
• The Colts are the only NFL franchise to keep its starting QB & offensive coordinator/line coach (Tom Moore/Howard Mudd) together for the past 10 seasons. RB coach Gene Huey is the longest-tenured assistant in team history: 16 seasons, 254 games (Marshall Faulk, Edge, Joe Addai).
• They've fielded a top-four offense each of the past five years. Not to mention they draw killer ratings on prime time TV.

When our free agents leave, they 0ften 0penly 0pt f0r d0-0vers. When they stay, they have access to his private jet, Pro-Bowls and performance bonuses. No wonder Bill Polian has won NFL Executive of the Year 5 times...