Mike Davis' '04 Recruits: Where are they now?

Josh Smith - tearing up the NBA (and winning a slam dunk contest) averaging 18 points, 8 boards, 4 assists, 3 blocks and 2 steals per game. His combined blocks+assists (4.9) leads the league and does wonders for my fantasy team


Robert Vaden - one of the most dangerous scorers in college basketball is in his 2nd season with the Blazers, following former-IU Head Coach Mike Davis from Bloomington to Birmingham. 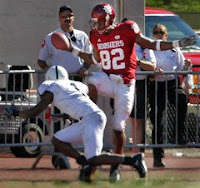