May 02, 2008
It may be too soon to comment on this, but Tuesday's shooting in Philly has been linked to Marvin Harrison directly. What we do know is that the Colts' Pro-Bowler owns a club (Playmakers) where the altercation happened and the gun used that injured a man's hand. Ballistics link #88's gun (found at his carwash) to the six bullets found at the scene of the crime, where a boy was also injured from shattered glass during the incident. What's not surprising is that none of the eyewitnesses are giving statements, other than the victim saying Marvin is NOT the shooter. 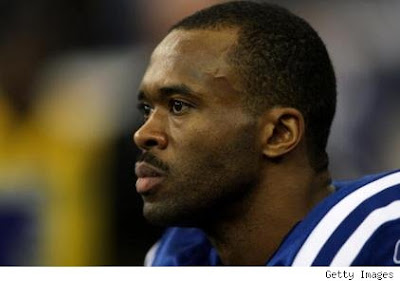 First IU dismissed Armon Bassett and JaMarcus Ellis for being insubordinate, then Eli Holman throws a tantrum in the coaches office and requests a transfer, now DeAndre Thomas is being released for unknown reasons; that accompanied with the graduation of Seniors DJ White and Lance Stemler and the departure of lottery-bound Eric Gordon, Jr leaves new Head Coach Tom Crean very few options at practice (2-on-2? knockout? 21/tips??). Jordan Crawford and Kyle Taber started a few games last year, so there will at least be some continuity from the Sampson Era (or Error), but I wonder if any Elite program has ever hit the bottom so quickly? That doesn't even consider any NCAA sanctions that may be announced this summer, or the additional scholarships IU may lose due to poor grades. The Hoosiers might go from twenty-five wins to twenty-five losses in '08-09.