September 11, 2008
Early this morning Ed Johnson was pulled over on I-465 in Hamilton County (surprise!) for speeding. Instead of rolling down his window to speak with the officer, Mr Johnson instead tried communicating through the car's sunroof. His excuse: new tint on the windows. Reality: he just hot-boxed his whip. 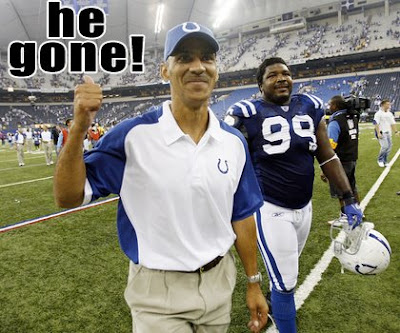 Police brought in a dog to sniff the situation out and found ~10 grams of pot in his center console. This isn't the first time the Defensive Tackle has been in trouble with the law, although it is his first arrest since joining the NFL last summer. At Penn State (yeah, he's one of the 49) he was suspended 3 times including the 2007 Outback Bowl game for charges including battery, confinement, possession, etc. Obviously, no NFL teams wanted to draft the troubled All-American Honorable Mention, but Bill Polian decided to give him a chance as an unrestricted free agent. He and Tony Dungy told Ed what he needed to do, or not do, in order to remain an Indianapolis Colt.
Basically he violated the terms of his probation, so to speak. Now the Colts are left with a depleted defensive line for the 3rd consecutive year. First it was DT Corey Simon and his 'diagnosis' - not to mention the legal battle for his undeserved paycheck. Then last year it was DT Anthony 'Booger' McFarland injuring himself in training camp, forcing the Colts to place him on the IR and eventually waive him. Additionally, last year's 3rd round draft pick DT Quinn Pitcock abruptly retired before camp this summer at the tender age of 24.
DE Robert Mathis no longer has the luxury of getting rest as Raheem Brock's backup; Brock will be moved from LE back to his original position at DT, alongside 2nd-year player Keyunta Dawson. This movement allows DE Curtis Johnson to be elevated to 2nd string, and DT Darrell Reid should get more playing time other than just special teams.