September 28, 2008
The Domers gained their third win in September after winning just as many games overall last season. 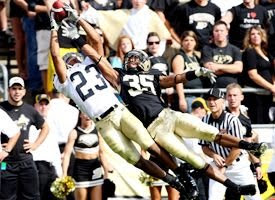 Sophomore Armando Allen led the ground attack and Freshman Michael Floyd emerged as a go-to receiver, all while Jimmy Clausen and Golden Tate both gave dazzling performances. The defense held Purdue's Kory Sheets to just 87 yards rushing and #12 Robert Blanton even returned one of Curits Painter's passes for a TD. Coach Charlie Weis called this win "huge... even bigger than the steak I had last night".