February 01, 2009
Thinking ahead to next year, I'm trying to put together a depth chart based on minutes this year, perceived talent, Rivals' rankings, Terry Hutchens' blog, etc. 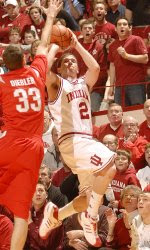 We've actually over-committed on the scholarships by 1, which means if nobody transfers or gets kicked off the team, IU will be responsible for telling one of the current scholarship players that they're gonna have to pay their own way for tuition. Yikes. My guess before Saturday's game vs O$U was that person would be Matt Roth, but that was until the kid went 9-11 from long range. My next best guess would be Tijan Jobe, but how do you essentially 'cut' a 7-footer entering his senior year? You can't. It still may be too early to speculate, but this could potentially become a major issue.
Anyway, next year's freshman class (and redshirted Jeremiah Rivers) will bring big bodies and leadership, two things lacking from this year's squad. As you can see, we'll finally have depth in 2010:

I like the idea of Nick Williams and Verdell Jones competing for 6th and 7th man next year. Is Malik Story transferring?