June 25, 2010
As of 2012, Indianapolis has been represented in 8 consecutive NBA drafts (add JuJuan Johnson + Marquis Teague to the pic below) 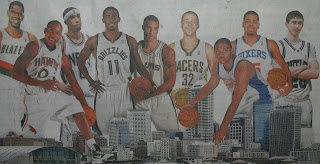 Indy, the king of basketball, has produced more than a dozen NBA players since 2006: Gordon Hayward, Eric Gordon Jr, Mike Conley Jr, Josh McRoberts, Courtney Lee, George Hill, Jeff and Marquis Teague. 3 more - Greg Oden, Rodney Carney and JuJuan Johnson - were drafted but currently don't see any action. Zach Randolph and Jared Jeffries do not qualify based on proximity and age. The same can probably be said for the Zellers and Plumlees. 2006 was the first year after the minimum age changed from 18 to 19. Since then, LA's amateur talent includes Mario Chalmers, Russell Westbrook, Robin and Brook Lopez, Demar DeRozan, Spencer Hawes, Chase Budinger, Jrue Holiday.