July 18, 2007
- Gerry DiNardo be joining Dave Revsine and Howard Griffith in the studio booth on the BigTen Network this fall. You probably don't care because you probably don't have DirectTV.

- Andre Owens is impressing new Pacers coach Jim O'Brien as they wrap up summer league play. Although Stevie Franchise and Brevin Knight are free agents, I think Larry is content with Jamaal until his contract runs out. The only way he'll be supplanted as starting PG is thru a major trade or next year's draft. They might be looking at picking up Jannero Pargo or Keith McLeod as well.

- The World Series of Poker ended today, and it really lived up to it's name. Jerry Yang, a 39-yr-old shrink from Laos took down 7 of the final 8 players at the final table which included a Brit, a Canuck, a Russian, a Vietnamese, an African and a Danish fellow. Yang took home $8.25 mil from the tournament that featured over 6,000 players with a $10k buy-in.

- A 17-yr-old girl from Indiana was on vacation in California this week and gave birth in a Denny's bathroom. She then stuffed the baby in the trash and tried denying it to her boyfriend and his parents. Police arrested the bloody girl and the baby is in good condition.

- A baby giraffe was born at the Indy Zoo this Sunday and he's already taller than me at 6'2". 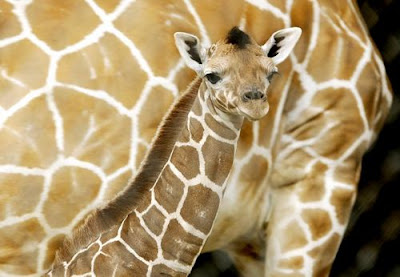