July 10, 2007
This was supposed to be a vacation, yet I wasn't able to sleep-in once this past week. Starting with a spur-of-the-moment road trip (is there any other kind?) with Nate, I was promptly issued a speeding ticket in a Work Zone. Then our plan of sneaking alcohol into the stadium was thwarted when we discovered you cannot buy liquor in downtown Cincinnati unless you cross the river over to Kentucky. Since we had already parked and began drinking, this was not an option. We decided to chug as many beers as possible to reach maximum intoxication by 7:05pm. Then one fairy hobo told us about a super-secret, foreigner-owned cigarette shop (is there any other kind?) a few blocks away that sells hard alcohol. We then scalped a pair of 4th row seats behind the Reds' dugout. 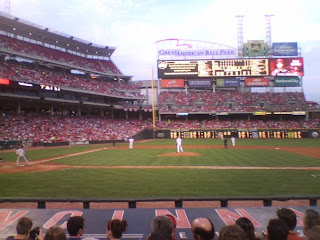 I had large pockets, so security didn't bat an eye as I snuck in the fifth of Early Times. Just after we arrived at the stadium, we purchased 2 large Cokes and poured out half, mixing in the tasty bourbon whiskey. One sip and I already determined I was gonna end up heckling one of the Reds players by the end of the game. I expressed hope that Juan Castro was playing, but I settled with berating SS Alex Gonzales instead. Fortunate for us, there were two teenage girls sitting beside us. Unfortunately, their dad was in between us and them. At some point, we grabbed the lead vs. the World Champion Cardinals, but alas the eighth inning was bound to arrive and the Reds bullpen surrendered their characteristic meltdown by a rookie pitcher. We did not stay for the fireworks.
On to Mt. Adams for more drinking, which is very easy to find if you just drive UP. We mingled with strangers til closing time, then we sat on some steps observing domestic violence between white trash: the dude karate-kicked his girlfriend and she dropped in the middle of Main Street clutching her abdomen in the fetal position. This was comedy. Some time later, I saw a gangly fellow with a cowboy hat on and a babe on his arm and said aloud "That guy looks like Homer Bailey" to which his response was "That's the name on my license!". Nate told me to go talk to him, but all I could think about was how I wish that was Junior instead of Homer. 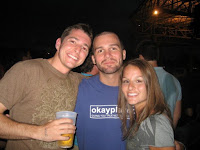 I spent most of Saturday fighting off the hangover, until I was picked up by a Hummer full of college friends and taken to Deer Creek. We chased tequila shots with Heineken in the VIP lot until we heard Ben Folds begin to play. Again I snuck in liquor, but when I awoke Sunday AM I found a full flask of vodka, a sure sign of browning-out. The John Mayer concert is VERY fuzzy, but I did not lose my phone or get arrested, so it's a win in my book. 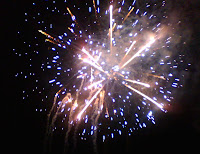 Tuesday night was a subdued night with Fam as we watched fireworks over the lake. Yawn.
Wednesday morning I drove down to Bloomington and picked up Shemmer (and lots of beer). We met up with Darren & co. on Lake Monroe and wasted away the holiday in party cove. As I was lying on a makeshift raft amongst best friends and beautiful girls while clutching a cold brew and peeing at the same time, I thought to myself "life does not get better than this". 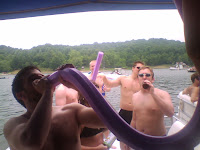 I will not mention the part about how someone decided it would be funny to jump off the speeding boat when the rental was already past due, because some people were not as drunk as others and it was not funny to them...
Speaking of, I had to high-tail it back to Indy that evening for Mags' party on Geist Reservoir. My breathalyzer said I was okay to drive, and I felt fine - albeit exhausted. I showered and grabbed a 12-pk of Corona before arriving at the Daniels/Krull joint-party just before sunset. There were very few faces I recognized, but plenty of entertainment. The rapport I built that night led to an invitation to a weekend getaway in Brown County. I was lucky enough to arrive earlier than most, thus securing a bed at the private cabin in the middle of Indiana's most famous State Park. Friday night we played many drinking games (everyone had beer but me). 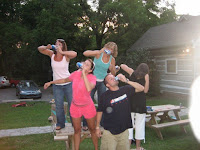 I do not remember the name of the exact game, but I was 'assigned' 12 drinks, so I was forced to chug my vodka on the rocks. Later, I recall answering the question "Are you drunk?" with "No, but I'm about to pass out". With no hangover the next day, I was more than happy to go hiking and canoeing and swimming and all that fun outdoorsy stuff, but the sun's rays were brutal and I eventually found myself watching Wimbledon; all I can say is "wow". There was much more partying that night, but because I'm sworn to secrecy I cannot divulge exactly what took place. Let's just say it was more fun than I had expected. There is no doubt I will be returning to the Aynes House in the future.
Stay tuned later this week for a recap if this is successful.