July 23, 2007
We finally have proof that cheating occurs and an embarrassed David Stern will still be commish after this. Big Market players and teams will still receive special treatment like a BigTen home game and the half-empty arenas will resemble high school-ish atmosphere. At least Conseco was trying when they ran their extended promotion last season making general admission $4. 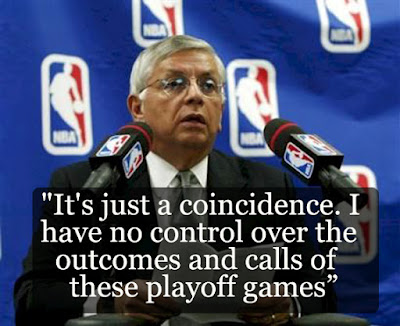 It's becoming miserable to root for my Pacers now, something I've never felt in my lifetime. As a lazy Reds fan, I'm used to it. But I no longer have my 4 die-hard teams, and as they say, some of my childhood is gone. I have a single piece of memorabilia at my crib, a J-O coozie. Conversely, I have over a dozen each Colts/Hoosiers/Irish gear...
Can we attribute the downfall starting with Larry (as owner, not coach)? I suggest we trade J-O for multiple draft picks & Ben Wallace. It's not a fix-all, but it's the best path back to Title Contender, as long as Donnie's calling the shots again. Paxson and Skiles would love J-O and the Bulls can certainly afford to donate draft picks - they don't need any with that roster. Also, I'd be able to heckle Wallace up to 41 times for $4/game.