March 20, 2010
After two unsuccessful tries, Randy Wittman's son Ryan has finally put Cornell into the next round. Ben Allen helped St Marys shock everyone by beating Villanova to advance to the 3rd round. North Carolina and Tyler Zeller have advanced to the NIT's Elite 8. The Butler Bulldogs took care of UTEP and Murray State, and are now halfway home. Who can forget Ohio's Armon Bassett's amazing March performance? Like Allen, Meezy played for Kelvin Sampson a couple years ago, as did Jordan Crawford - probably best known as that kid that dunked over LeBron James, now has Xavier looking to make another Regional Finals appearance. 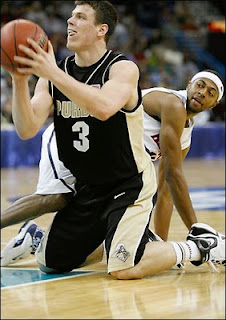 Purdue Boilermakers have shushed all doubters by advancing to their 2nd consecutive Sweet Sixteen.
Ohio State and Michigan St are also representing the BigTen, with Northern Iowa/Tennessee standing in the way of a trip to Indy. However, not all is bright in the Schrockstar Galaxy of Stars: Notre Dame lost in the first round to Old Dominion; IUPUI lost the league championship to Oakland; and Indiana, Ball State, Evansville, Indiana State, Valparaiso and Vincenses were not even invited.