March 28, 2010
As history tells it, 18 of the past 23 Final Fours have featured either Duke or North Carolina (1991 had both). In fact, since 1956 there's only been a single Final Four didn't feature at least one of these schools: Duke, UNC, UCLA, Kansas, Kentucky, Indiana, Louisville, Cincinnati or Georgetown. The year was 1979, featuring Indiana State's Larry Bird vs Michigan State's Magic Johnson in the championship game (DePaul & Penn were the other two.) 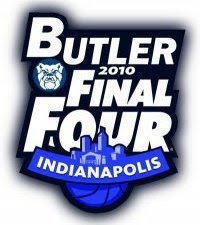 While Coach K & Duke have clinched just their second Final Four in nine years, Tom Izzo & Michigan State are making their sixth Final Four appearance in twelve years. BigEast champ West Virginia's previous appearance was 1959, but Bob Huggins led Cincy to the Final Four in 1992 (along with IU, Duke and Michigan's Fab5). Although Brad Stevens will be coaching in his first Final Four among 3 Hall of Fame coaches, he's still got a major advantage: this is the first time a Final Four team is playing in their own backyard since 1972 (UCLA), four years before he was born.