May 28, 2010
The Purdue Women's Golf team won a national championship, the third* title in school history. Although leading by 7 strokes entering the final round, that lead was squandered to just 1 after Maude-Aimee LeBlanc bogeyed hole #18. 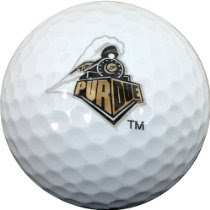 SoCal had a chance to tie it with a 10-foot birdie attempt on the final hole but the putt missed right. Since 1993, either a Pac10 school or Duke had won every national title.

*The other two NCAA Championships were the 1999 Women's Basketball team and the 1961 Men's Golf squad. They still trail IU by 20.